Hello. Welcome to the new feature, “Two for Tuesday.” We will be showcasing two reviews each Tuesday for the foreseeable future. Once we no longer have enough books to do two reviews, we’ll use Two for Tuesday to do One Book Review and one, something or other…decision to be made at a later date.

Sherry’s Wolf (After the Crash; 3.5) by Maddy Barone

It’s the year 2064. Sherry left home in 2014. Somehow, a plane crash happened that sent her and other survivors into the future, nearly 50 years.

Women are a precious resource. Plauge wiped out much of the population, but women in a larger number. Werewolves are known to be alive and well, and running in packs.

Sherry’s Wolf is intended as a stand-alone, or so I had gathered, but I must say, it doesn’t stand on it’s own so well. I found myself confused many times while reading this book. Trying to understand exactly who Stag is and his place in the Clan. How Sherry came to be 50 years in the future, because it’s not addressed all that well.

The first bit of the book was decent, save for not understanding much of it, but the last chapter or two took a weird turn. Suddenly, Sherry is calling Stag “Baby” after calling him Bastard only a few hours earlier. The change was so abrupt, I found myself wondering if I was reading the same book after all.

I wonder if a little more back story, without a complete rehash, might have made this book a bit more palatable. I do recognize it was written for those readers who are already fans of Ms. Barone, but as a new reader, I found myself lost.

Even with all that, I am still very interested in reading the first books in this series.(After the Crash)  The premise is a bit different in my opinion, and perhaps if I had already read those books, this one would have made a bit more sense.

Her Own Best Enemy by Cynthia Justlin

Title: Her Own Best Enemy

Her Own Best Enemy by Cynthia Justlin was a brisk paced read from the beginning. The pace of the story fit the plot and the 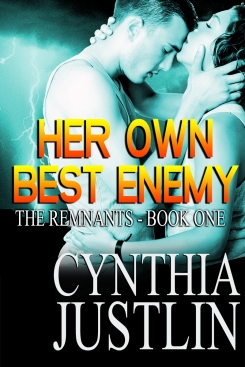 characters to a “T” in every sense of the word.

Grace Stevens is a mother with everything to lose. Her son has been kidnapped by her ex-husband and the only man to help is one from her past. One with whom those past dealing were anything but good.

Keith King is the man that can help Grace find her son Ryker. But will he? He’s in a Rehabilitation Center and to leave is to go AWOL from the Army where he is part of Special Forces.

Grace convinces Keith to help her, and he escapes the secure facility, and meets her at a per-arranged rendezvous point. Of course, things aren’t that smooth, but I’m not going to spoil the book for you by telling you too much.

Early in the story, Grace and Keith go to Grace’s ex-husband’s home, where they discover that Mark Stevens had not taken Ryker’s asthma medication with him. Grace being a diligent and very worried mother wants to get the medication, but at that moment….

The story continues as Grace and Keith go searching for Ryker and find other things along the way. In reading the book, you’ll learn what those things are and how it all ties together to bring us to the ending we receive.

If you like a strong heroine, an Army Dude and a smart and loveable kid, then this is the book for you, with some “bangs” thrown in for good measure.

I want to say to Cynthia; job well done. I very much enjoyed reading Her Own Best Enemy. I look forward to reading more from you.